I’ve written before about my love for the Crown and Anchor loyalty events on Royal Caribbean cruises, where the company thanks the highest-level cruisers in its loyalty program. Usually, this entails a few complimentary drinks and an entertainment program of some sort, along with recognition of the cruisers onboard with the most cruise points.

So you can imagine my surprise (in fact, the surprise of nearly everyone in the Royal Theater on Harmony of the Seas) when our cruise director took to the stage and introduced the CEO of Royal Caribbean, Michael Bayley! As a self-confessed cruise nerd, I was more than a teeny bit excited as Mr. Bayley proceeded to announce that he’d be taking questions from the crowd.

In fact, he answered questions – some with great candor, and many with humor – for almost half an hour, during which I furiously took notes on my iPhone. (Note: Maybe all that practice typing for texting was good for something!) He took questions about a wide range of topics, and graciously accepted some suggestions that quite honestly my husband and I rolled our eyes at. A few highlights to me:

Now, of course the CEO of the company doesn’t show up at the loyalty event for every cruise – he told us that he’d boarded our ship the day before to study some of the features of Harmony in anticipation for planning the new Icon class of ships that’s scheduled to debut in the 2020s. It was a true stroke of luck, as our event had originally been scheduled for Day 2 of the cruise, and postponed due to rain. But hey, sometimes you happen to be in the right place at the right time!

I’ve written before about the Crown and Anchor Top Tier event (for Platinum level members and higher) that the hubby and I attended on our Majesty of the Seas cruise in the Bahamas. I was intrigued to attend the similar event on the Explorer on the Seas because this is a much bigger ship, and I was curious how many people would attend.

One thing that was different on the Explorer cruise: we didn’t get our invitation to the event until midway through the week, and the event was held on the last day of our cruise. No problem – the event was held on our last sea day, and we had a pretty clear calendar. 😉 We attended the event, which was held in the ice rink, a feature found in Royal Caribbean’s Oasis, Freedom, and Voyager class ships.

(Side note: I just don’t get ice skating on a cruise ship. You can both attend skating performances and participate in an open skate yourself, but I’ve never found myself wanting to do it. I guess it’s a matter of personal preference!)

Indeed, there were a lot more people attending this Top Tier event, which was not surprising as it was a much bigger cruise ship. Waiters were walking around with the usual drinks (I opted for champagne again) and even some small hors d’oeuvres. The program was similar, but with one noticeable difference: The top cruisers had far fewer nights at sea than did the ones at the Majesty C&A event.

I didn’t mind attending the event because we really didn’t have anything to do, and we got a few free drinks out of it. I think the hubby is getting a little sick of them, though – he opted out of the event on our next cruise. (As it turns out, I kind of wish that I had too….)

At the time of our Majesty cruise, my husband and I were at the Platinum level of the Royal Caribbean Crown and Anchor Society, which gives frequent Royal cruisers bonuses for their loyalty. One of those perks is an invitation to some sort of onboard party, which we attended in the late morning of our first full day on the cruise.

I love going to these events because, well, I’m a cruise nerd. I like hearing about the industry and I often hear updates on advancements and improvements being planned by the company – this time it was discussion of the massive CocoCay renovation, which will include a pier for ships to dock at and other additional facilities on the island. (At our event, they suggested a salt-water wave pool would be among the additions – a neat touch as the water at CocoCay doesn’t have many waves to speak of.)

I also love going to the C&A events because, well, they give you free drinks! Most of them will have waiters moving among the crowd with a tray featuring a number of different drink options (mimosa, rum punch, etc) but if you ask nicely, they can often bring you something else. I usually drink champagne, myself – it’s not the best vintage around, but hey, it’s free!

I really love the camaraderie at these events – at the event on Majesty in particular, cruise guests and staffers were greeting each other like old friends. Clearly, our group included a number of very frequent cruisers – many were at the Pinnacle Club level, earned by cruising over 700 nights, and one cruiser had over 2800 nights! (Our cruise left from Port Canaveral in Florida, which likely contributed to the number of frequent cruisers, many of whom lived within driving distance.)

After an event around 30 minutes, my husband took our glasses of champagne up to the Viking Crown Lounge to watch the sail in to Nassau. Even though it was gloomy weather at the time, this was a very pleasant way to spend the morning! 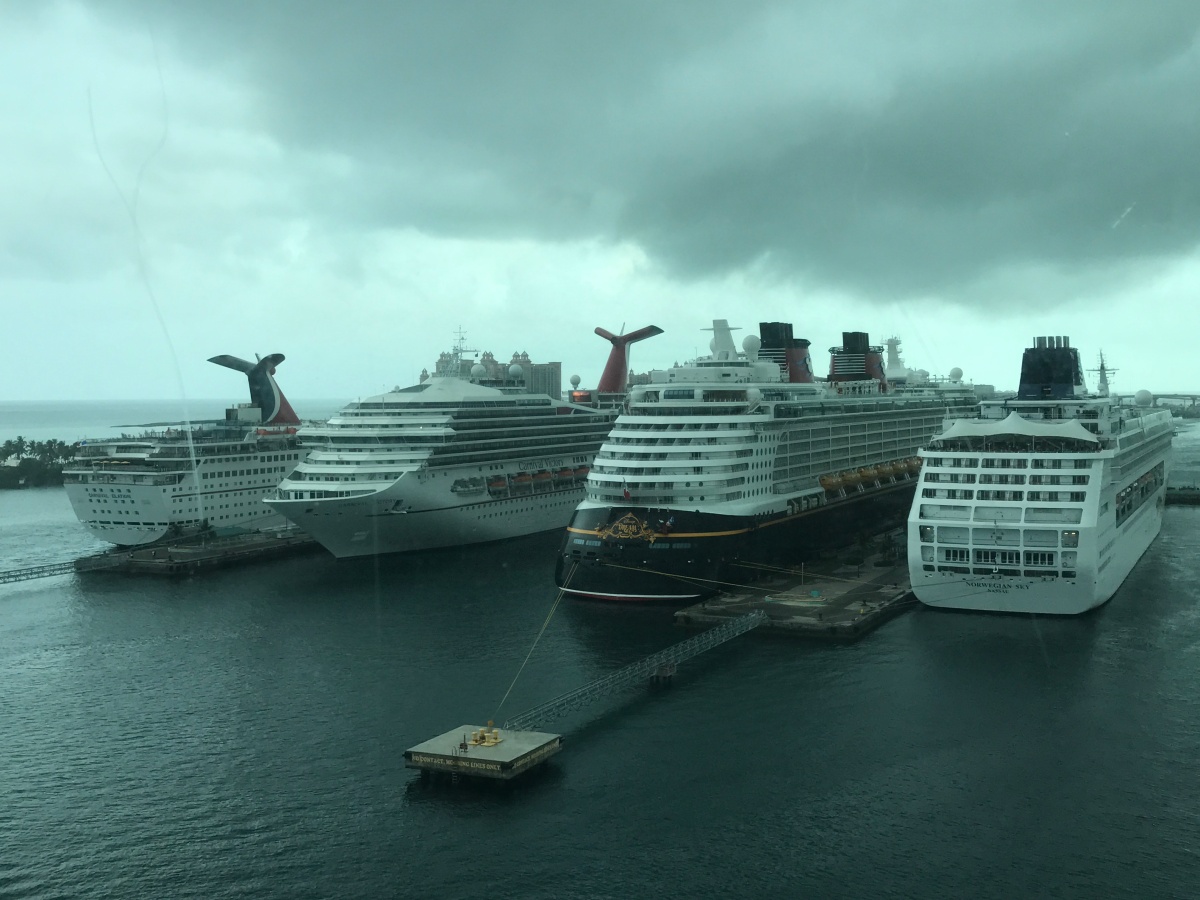 Who Is the Nerdy Traveler?

Hi, I’m Jessalynn! In 2017, I started this blog to share my love of cruising and other travel and give tips to other travelers. I’m also training as a travel agent to book cruises. Visit my web site at http://www.thenerdytraveler.com for more!